We’ll leave the light on for you.  My mother always left a light on.  I remember that it would be left on no matter how how foggy or late the night.  My home also held recipes as if time could be bottled.  In fact, when I think of coming home I remember soup and another home more than a thousand of miles away.

Between my junior and senior year of college, I spent a summer in Vienna and my summer included a promise.  I promised my grandfather that I’d visit his birthplace in the Netherlands.  My grandpa had immigrated from there as an indentured worker.

Little did I know that it was to be a hot Sunday at the very end of my summer, that only one train from Amsterdam made this trip on weekends, and that I’d be at my energy’s end.   I landed on the train for two hours and then walked carrying a full suitcase, through a quaint village called Krabbendijke.   Arriving, no one answered my knock.  As I slowly turned around to make the walk  back to an empty train station, I heard a voice call out:  “Hey…wait!”  I  instantly recognized its tone, and knew what the voice coming from a 2nd floor implied.  Of course!  It was Sunday and they were taking an “after-dinner” nap.  That’s what my own parents would be doing back on their midwestern Sunday.  I turned and was welcomed into the house, and a small woman came down one of those steep stairs to be found in tiny Dutch homes.  The woman coming down the ladder-like stairs was my mother’s cousin.  She really could have been her doppelganger.

After embraces and warm greetings, she said:  “you are sick?”  Wobbly on my feet, I admitted as much, and was surprised that she had spotted my condition.  She pulled on what looked like a large drawer, but in this Dutch home concealed a pull (trundle) out bed.  I tumbled into the feather mattress, and slept as if in my mother’s arms and care after a summer away.

When I awakened, I was served a soup.  Vegetable with a chicken broth.  Densely filled with chopped vegetables, chopped celery, and some potatoes and beans.  It tasted like the exact same recipe my mother used to make vegetable soup.  I recognized its flavor.  These women had learned to cook from their mothers, and what their mothers put in soup easily passes tests of time and distance.  It was well flavored, and had designed to be good for what “ailed you.”

I have experienced homecomings of all sorts since then but it was then when I first tasted a national pattern for food and how its recipes get passed along.    I’ve  also since seen the Anthony van Dyck painting (1618) 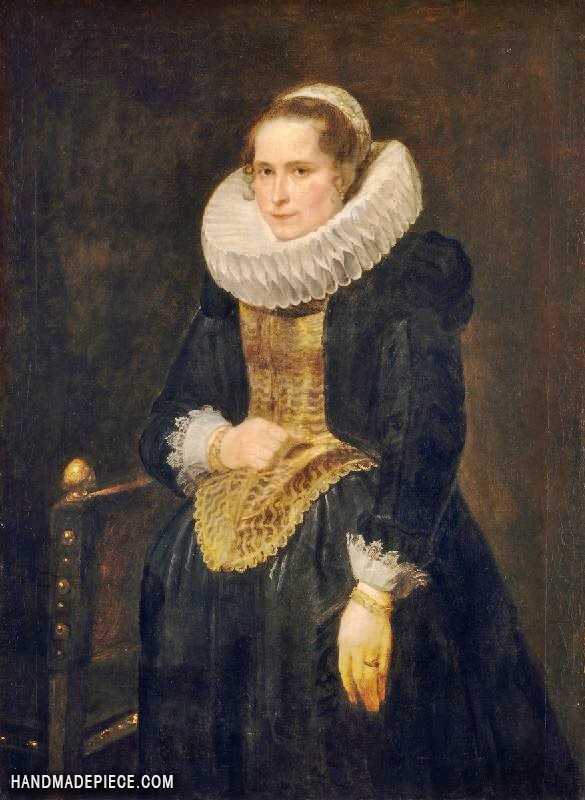 which shows another women, sure,  but it could also be used as another “spitting image” version of  my mother.  All she needs is an apron, but chances are the soup would be the same.

In the can notes